About the Daily Use, Maintenance, and Repair of HPLC Columns

According to statistics, nearly 80% of organic and inorganic substances can be separated by high performance liquid chromatography. Have you paid attention to how to maintain and repair it? HAWACH specially sorted out the issues related to the maintenance and repair of HPLC columns, and hope it will be helpful.

(1) When loading, unloading, and replacing the HPLC column, the movement should be light, and the joints should be tightened appropriately.
(2) If the instrument is used for routine analysis and the sample types are limited, but the number of analyses is large, you may wish to configure one column for each type of routine analysis, which will help extend the life of the column.
(3) When using a column temperature control device, it should be noted that the temperature can be raised only after the mobile phase is introduced.
(4) The mobile phase needs to be degassed before use to avoid reducing column efficiency and affecting detection. The sample solution needs to be properly pre-treated and filtered to reduce column contamination and clogging.
(5) When changing the type of mobile phase, pay attention to the mutual solubility of the solvent to prevent salting out.
(6) The actual operating pressure of the HPLC column should be lower than the pressure during filling, and it is recommended to be less than half of the upper limit pressure. Generally, it does not exceed 20593.965 ~ 29419.95 kPa. Used in the range of low pressure (≤14 709.975kPa), the column can maintain high efficiency for a long period of time. 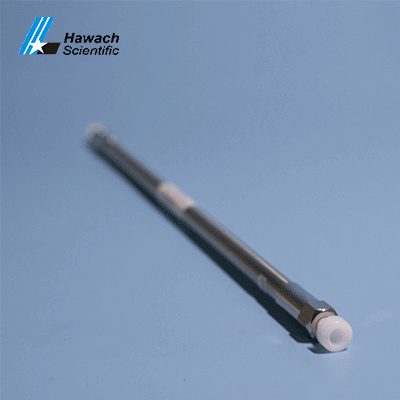 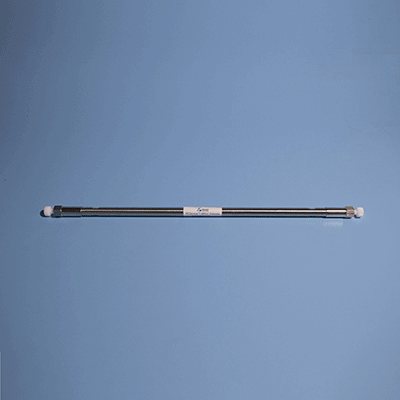 (7) The C18 chromatographic column is a non-polar bonded phase chromatographic column, and the pH value of the mobile phase should be strictly controlled between 2 and 7, so as not to damage the column.
(8) After completing the separation and analysis, the chromatographic analysis system should not be shut down immediately, and the chromatographic analysis system should be flushed in time, generally for more than 0.5 h.
(9) If there are salts in the mobile phase, rinse thoroughly with water first. If amines (such as trijia amines or tetrabutyl amines) are added to the mobile phase, use a mixed solvent of 50% methanol and 0.05% phosphoric acid to rinse, not just water rinse.
(10) C18 generally uses 100% methanol as a storage solvent to prevent the column from drying out and damaging. It is strictly forbidden to keep water or buffer solution in the chromatographic flow path for a long time.
(11) Choose a suitable C18 guard column to protect the analytical column from impurity particles and irreversibly adsorbed interferences. The particle size of the packing in the guard column should be as consistent as possible with the particle size of the analytical column packing.
(12) The shelf life of the column should not be too long. For C18 columns that are not in use for a short period of time, wash them with methanol for 30-60 minutes, and then seal both ends of the column. For the columns that have not been used for a long time, one is to periodically flush and reseal; the other is to install a methanol-filled container with a certain capacity at each end of the column after flushing (only one end is acceptable) to supplement the Evaporation of solvent in the column during long storage.

2. Repair
In the daily use of chromatographic columns, despite strict protection, samples and mobile phases have undergone pre-treatment, but after long-term use, it is still difficult to completely avoid contamination of the column, loss of stationary phase, compaction, the collapse of the column bed, and decrease in column efficiency, etc. Some can be repaired to restore part of the column efficiency.

If necessary, according to the nature of column pollution (such as organic pollution, salt pollution, etc.), use 0.05 mol/L H2SO4, 0.5 mol/L H3PO4, or 0.1 mol/L EDTA sodium salt to rinse, then rinse with water, and then use 100% methanol seal the column after equilibrating. For heavily contaminated C18 columns, you can use water, methanol, lvmide, and ethane to rinse in sequence, and then reverse the sequence and rinse once. Each time 60mL of solvent is used, no detector is connected, and 100% methanol is used to equilibrate the chromatographic column.

2.2 Remediation of column contamination
When the column pollution regeneration is invalid or the column pollution is known to be serious, the method of column repair can be used to solve the problem, but the depth of column pollution should not exceed 5 mm. The method is to dig out the contaminated part with a special spatula, then mix the same stationary phase as the column packing with the mobile phase to make a slurry, and then carefully fill the slurry-like stationary phase into the excavated part (try to make the fixed phase is close to the original tightness), and the end face can be smoothed. If the pore size of the sieve plates at both ends of the repaired column is the same, the column can be turned upside down and used for normal time. The purpose is to restore the compactness of the column bed by washing with the mobile phase.