How to choose the HPLC column?

1. Separation mode
The first task in choosing a column is to select the mode of separation. There are many ways to separate molecules, some of which are widely used including reversed phase, normal phase, hydrophilic interactions, ion exchange, and size exclusion HPLC. There are also less common but more specialized separation modes such as specific chiral chromatography using a chiral stationary or mobile phase. Reversed-phase columns are typically used for non-polar or weakly polar organic compounds and contain a non-polar stationary phase (e.g. C18), usually paired with a polar mobile phase. The C18 reversed-phase column is suitable for the analysis of more polar substances in highly aqueous conditions. However, this method is not suitable for proteins, as the mobile phase usually contains low pH acetonitrile or methanol, which may denature proteins and therefore produce pseudo-peaks or cause protein aggregation and column blockage.

2. Column length
Once you have determined the mode of separation and type of chromatography, consider the length of the column. The ideal column length will depend to some extent on your particular sample and separation mode. Generally speaking, longer columns require longer run times but produce better separations. Column length (sometimes called “bed height”) is particularly important for separating proteins based on size.

3. Size and type of packing
HPLC column beds consist of spherical functional particles typically ranging from 2 to 10 μm in diameter. Particle sizes smaller than 2 μm are used for UHPLC, and UHPLC is run at very high pressures, so it uses smaller particles than HPLC. HPLC 2μm silica matrix chromatography fillers have a uniform pore distribution, and high compressive strength and, due to the high activity of the surface hydroxyl groups, can achieve rapid separation and purification under medium to high pressure. In general, the smaller particle size provides higher separation rates – with the caveat that the back pressure is also higher in order to pump the mobile phase into the denser column. 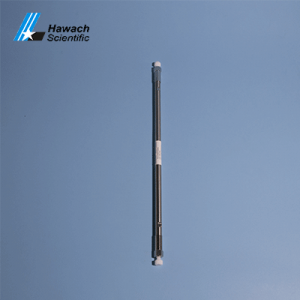 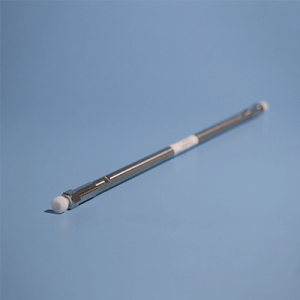 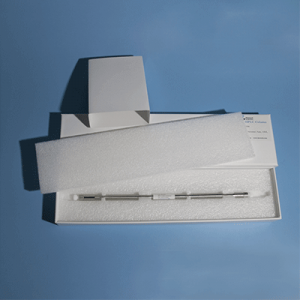 4. Materials for chromatographic fillers
Common choices include silica, hydroxyapatite, and cross-linked polymer resins. Common hydrophobic alkyl chains are available in lengths such as C4 HPLC column, C8 HPLC column, and C18 HPLC column. Typically, the material has a degree of selectivity for the target analyte – making this choice is important to optimize the separation. For example, C18 is more commonly used to separate peptides or small molecules, while C4 is more suitable for proteins.

What are the common failures of HPLC columns?

1. Column pressure is too high
Maybe the particle blockage. Column bed expansion, irreversible adsorption, bacterial growth, etc. caused by. It is also possible that the system counter pressure problems, such as damper blockage, sample feeder blockage, and tube or connection port blockage. The online filter is not clean, the pressure sensor is not accurate, etc.

2. Low column efficiency
This may be caused by contamination of the column, partial blockage of the filter, or dead volume in the column, e.g. loss of stationary phase due to inappropriate pH or composition of the mobile phase. Rapid changes in the mobile phase cause physical damage to the stationary phase, mechanical vibration causes cracks in the stationary phase, and shrinkage or dryness of the column bed. It is also possible that the instrument is connected to the problem, carefully check whether the injector, detector, tubing, protection column, and online filter are connected, or the column is not well balanced, the sample volume is too large, and other problems.

How to ensure the HPLC columns work effectively?

Samples introduced into HPLC columns are often diverse and complex and may contain many components that are incompatible with HPLC conditions. Injecting such samples without proper sample preparation or sample pretreatment can lead to column blockage. Residual proteins and highly hydrophobic compounds (e.g. lipids), for example, may also not be completely eluted during reversed-phase separation, and they tend to slowly adsorb onto the analytical column and cause problems.

Incompatible sample diluents and mobile phases can also cause blocking problems. If the two are incompatible, sample precipitation will usually occur if the diluent and mobile phases are too polar in contrast when the sample is introduced into the mobile phase. Mobile phase buffers are often used as the mobile phase in HPLC and it is important to filter these buffer salts before use. Sometimes, due to differences in laboratory temperatures, some buffer components tend to precipitate, or the use of too high a concentration of buffer can also cause precipitation. Debris from worn pump seals or other seals will always wear over time, and these components tend to produce some debris or metal ions, etc. in the solvent lines. Without the regular maintenance of the pump and inlet, contaminants tend to reach the column screen and clog the column.